All titles are available from Amazon or from the publishers

Recently published:
Beyond the North Wind 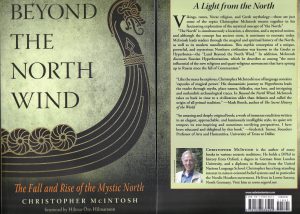 An exploration of the mystique of the North from ancient times to the present day.
Publisher: Weiser Books, Newburyport, Massachusetts, USA.
ISBN:978-1-57863-640-2.

This classic study examines a remarkable era in the istory of occultism. Its central focus is Eliphas Lévi (1810-1875), would-be priest, revolutionary socialist, utopian visionary, artist, poet and, above all, author of a number of seminal books on magic and occultism. It is largely thanks to Lévi that the Tarot is so widely used today as a divinatory method and a system of esoteric symbolism. The magicians of the Golden Dawn were influenced by him, and Aleister Crowley believed himself to be Lévi’s reincarnation. The book is not only about Lévi and his era but also about the remarkable figures who preceded and followed him – the esoteric Freemasons and Illuminati of the 18th century, and later figures such as the Rosicrucian magus Joséphin Péladan, the occultist Papus (Gérard Encausse) and the writer Joris-Karl Huysmans, whose work drew strongly on occult themes. These people were avatars of a set of traditions which are now seen as an important part of the western heritage.

This book traces the history of Rosicrucianism from its mysterious origins in 17th-century Germany up to the various revivals and offshoots and orders that have plugged into the Rosicrucian legend, such as the Hermetic Order of the Golden Dawn.

The Rose Cross and the Age of Reason: Eighteenth-Century Rosicrucianism in Central Europe and its Relationship to the Enlightenment
(Revised edition, Albany, New York: SUNY Press, 2011)

The Golden and Rosy Cross order. The order stands out as one of the most fascinating and influential of the high-degree Masonic and Illuminist groups that mushroomed in Europe from the 18th century onward. Active mainly in the German-speaking lands, it recast the original Rosicrucian vision and gave it renewed vitality. At one point it became politically influential when the Prussian King, Frederick William II, was a member of the order. Historians have often perceived the Golden and Rosy Cross as having had a conservative, anti-Enlightenment agenda, but this study—drawing on rare German sources—shows that the matter was more complex. The members of the order practiced alchemy and operated a degree system that was imitated by later orders, such as the Golden Dawn. Like the latter, the Golden and Rosy Cross exerted a wide and enduring cultural influence. 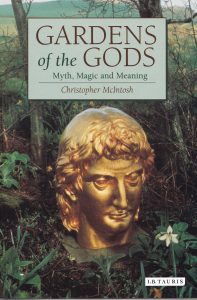 a very old way that has been widely forgotten. It theme is the garden as a sacred space, an outdoor temple carrying an intentional message: religious, mystical, poetic or philosophical. A chapter gives some practical ideas for creating one’s own sacred or symbolic garden, whether in a space of many acres or a pocket-handkerchief back yard. An appendix provides a list of plants and their symbolic meanings, and the illustrations include some of the most beautiful and richly symbolic gardens in the world. 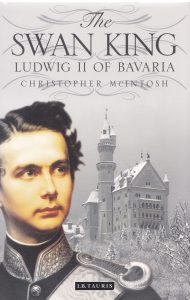 The Swan King is the biography of one of the most enigmatic figures of the 19th   century, described by Verlaine as ‚the only true king of his century‘. A man of wildly eccentric temperament and touched by a rare, imaginative genius, Ludwig II of Bavaria is remembered both for his patronage of Richard Wagner and for the fabulous palaces which he created as part of a dream-world to escape the responsibilities of state. In realization of his fantasies, he created a ferment of creativity among artists and craftsmen, while his neglect of Bavaria’s political interests made powerful enemies among those critical of his self-indulgence and excesses. At the age of 40, declared insane in a plot to depose him, Ludwig died in mysterious circumstances. 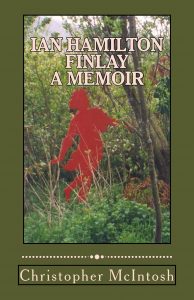 This is a personal portrait of the Scottish poet and artist Ian Hamilton Finlay, his life and work. It recounts Finlay’s emergence as an avant-garde writer and poet in the 1950s, the creation, together with his wife Sue, of his famous garden at his home Stonypath-Little Sparta in Lanarkshire, his espousal of the ideals of the French Revolution, his defence of classical values, his idiosyncratic form of paganism, his struggle against what he called the “secular terror”, his many battles. Having been seen by many as an enfant terrible, he was in his later years fêted by the establishment, given honorary doctorates and an honorary professorship, awarded a CBE and hailed as Scotland’s greatest artist. Today he has a world-wide reputation, and in 2004 a panel of artists and arts professionals voted the garden at Stonypath-Little Sparta the most important work of Scottish art. This lively personal tribute is a must for Finlay scholars and admirers. 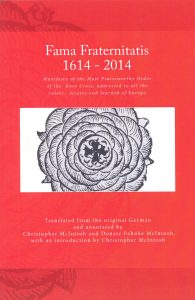 Fraternity) burst like a firework over Europe in the early 17th century, igniting the imagination of many with its story of the German seeker Christian Rosenkreuz, his journey through the Middle East in search of wisdom, and his creation of the esoteric Rosicrucian Fraternity. The first of three so-called Rosicrucian Manifestos, it has hitherto received no adequate English translation. Now Christopher McIntosh and Donate Pahnke McIntosh have produced an English rendering, based on careful study of printed and manuscript versions. This edition is an essential resource for all who are drawn to Rosicrucianism, whether as a field of study or a spiritual path.

The Fama translated into modern German by Donate Pahnke McIntosh, with an introduction by Christopher McIntosh.